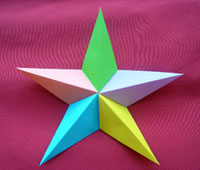 A while back I was approached for permission to use one of my modular stars in a theatrical performance called “Moon 2 @ Tryston” in America.

The play is described as “an intergalactical political romance”, about two very different planets in a far-off solar system. Planet Verideen, where women reign over men, is ruled by Queen Philoxena and planet Gobara where a person’s worth is measured solely in material terms. With me so far?

Of course, I agreed. Other models include those by Endla Saar, Michael Shall/Marshall and Lillian Rothenberg. The play is now showing, see here for information.