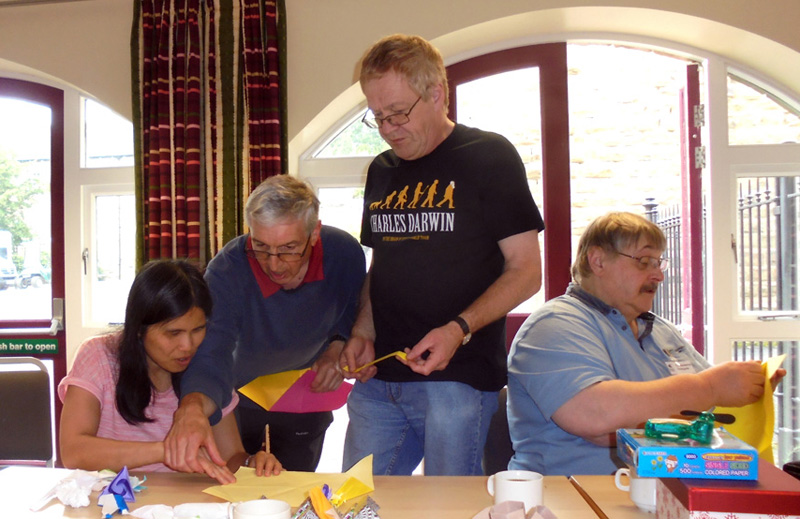 Another superb weekend with my friends at this private origami weekend, now in its 9th year. I urge you all to try it, find a nice venue with cheap accommodation, keep the numbers down and gather your folding friends. Below is some background, written for the BOS magazine :

Maxi-meeting or Mini-convention?
Way back in Spring of 2007, the BOS held a convention at Wentworth Castle, just outside of Barnsley. This was part of an experiment too see if there were any benefits to holding a major and a minor convention each year, to reduce the strain on convention organisers. Wentworth was scaled back slightly and had no special guest. Council decided upon discussion that they did not wish to return there.

I felt this was a shame, since the venue and the location were marvellous, so I discussed with my fellow mini-meeting attendees about hiring it for a “maxi-meeting” in mid-summer 2009. I negotiated with the venue and we arranged a very fair price for the weekend, including accommodation, meals and use of a large meeting room.

We agreed that the key to success was to keep the numbers low, so that it could be kept informal and avoid the necessity for too much organisation. I started by inviting those who came to my mini-meetings in Sheffield, then essentially, asked some of my close origami friends if they wished to attend. In the end, 13 people came. Most arrived Friday night and trooped off to the nearby village pub for some home-cooking. The next day we had some sessions where everyone was together, then split into two groups. The schedule was arranged entirely on the fly, with everyone free to suggest what we did.

With Wentworth being surrounded by the most glorious grounds, we went for a walk after the evening meal, exploring the woods, the faux-castle and enjoying the stunning views of the countryside. After that, we settled down to fold and make merry until the wee small hours. The rooms were a few yards from the room and people retired to bed according to their stamina. Sunday was along similar lines and we parted, tired but happy around 4.30.

Since then, we have had a similar event every year, with numbers ranging from 10 to 21. We have agreed that around 15 is the magic number and this creates possibly the only down-side to the weekend, having to limit numbers. We have a core team who have been in from the start and depending who amongst these is able to attend, a few extra places are possible. We offer these to people who we feel will fit in with our relaxed ethos and try to invite different people each year. It’s awkward when people wish to return, but if the numbers kept creeping upwards, we would lose the magic and it would have to become more formal.

The reason I’m sharing this is not to create a mass of requests to attend, but to encourage you to try and organise a similar event yourselves. It’s a private event, nothing to do with the BOS and so you can invite who you like and meet where you like. Essentially, it’s like a private party.