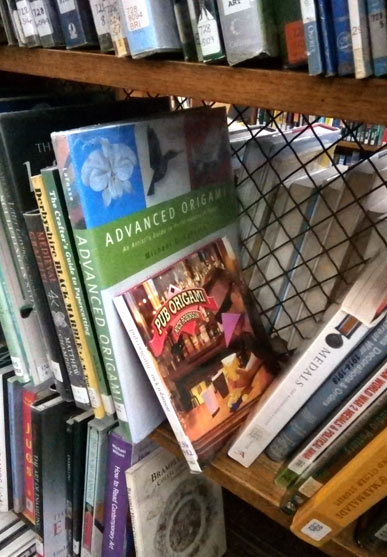 I recently passed by the Sheffield Central Library (after an absence of many years) and popped in to see what had changed. Surprisingly enough, very little, it was exactly as I remembered it as a child. How long it will last in the face of current financial pressures remains to be seen, but it brought back many happy memories.

It was here in the early 80s that I discovered origami, whilst working my way through the craft section in search of entertainment. The book I borrowed was by Linda Walker and contained uncredited models mostly by Honda. It was a challenge I really enjoyed and for some time, this was my only origami book.

After I took the subject up seriously, I held several exhibitions and teaching sessions inside the library and always checked 736.9 (the Dewey decimal code for origami) to see if anything new had arrived. In these days, there were relatively few books on the market, unlike today, when the market is saturated with books, mostly mine 😉

I asked the helpdesk if they stocked any of my books and was delighted to see quite a few on the database, although several (including “adult origami”) had not been returned, i.e. they were stolen. I’ve offered to replace some of these. Browsing the shelves, they had one of mine on display and it brought a real glow to my heart. Who would have thought all those years ago that a passing interest would develop into a life-long passion? Libraries are closing all round the country and this is a tragedy, but perhaps a sign of these technological times when all answers are to be found on google or youtube ;(