I was recently invited to Manchester to join the travelling roadshow celebrating the 20th anniversary of the “Dummies” imprint. The prospect of adding a few more sales to my name was more than sufficient to entice me over the Pennines, especially since I had an excuse to meet Lord and Lady Brill of Worth Hall in the Boars Head at Higher Poynton for lunch.

The “gig” ran from 3-5pm and I was sat by the tour bus in a square in the centre of Manchester. Previous demos had been given on “organic growing” and “body language” and there were lots of people passing by – the weather was unseasonably nice by Manchester standards. We were also joined by the “Dummies Man”, who was hugely entertaining – alas, I forgot to have a PR photo taken alongside him. Oh yes, they were giving away small bars of chocolate, which I felt obliged to consume out of company loyalty. 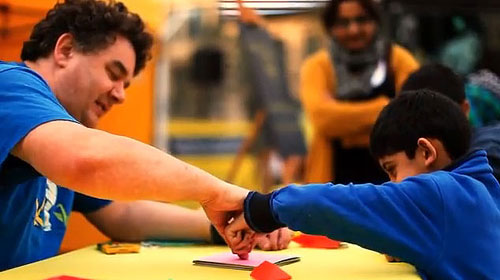 Curiously, theywere not allowed to actually sell books (some local by-law) but were handing out £5 vouchers towards the cost of any Dummies book from WH Smiths. Naturally, I encouraged them to choose O4D! I taught both children and adults and it was a highly enjoyable experience. The Dummies staff were friendly and professional, despite a touring schedule which sent them from Colchester up to Edinburgh!

The Dummies brand is almost unique in brand awareness terms, largely due to a rigorous internal style policy which ensures each book matches up to previous ones. The Origami book was apparently the first in their series which was art rather than text based.

I had high hopes after what seemed like the relative success of the book that we could make a follow-up volume, but the powers that be in America apparently decided this wasn’t a goer. Maybe if they get enough encouraging emails, they may reconsider (hint hint).