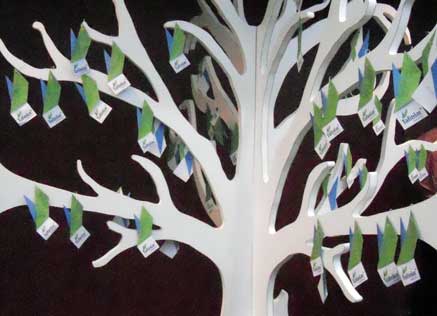 I had a great project recently, to design a way of folding the logo of a new drug from an international pharmaceutical company. The logo wasn’t too difficult, but I had to work on the proportions and most importantly, a good sequence, since I was required to fold 300 of them in advance.

This required a double-sided template with the colours and logo in the right place, which was sent to the States for printing. The origami was for a launch event in Amsterdam and I was delighted that they wanted me there to make “gift” fold for delegates. Knowing pitifully little about Holland apart from being the home of; the OSN, of one of my favourite bands (Focus), clogs, cheese and windmills, a visit was long overdue.

There was an opportunity for me to go over early, so I was delighted when my good friend and talented origamist  Paula Versnick offered me hospitality. I flew from Leeds/Bradford for a change, decent price, not too far to reach and with a fraction of the crap usually required to get onto the plane in a big airport. I flew to Schiphol, where Paula’s partner, the charming Gerard, works, so he took me back to their house in Huisen. I spent some time admiring her amazing collection of books and her display cases of delightful models folded by their creators, including a stunning Joisel model. We then finished off the folding of the logos! 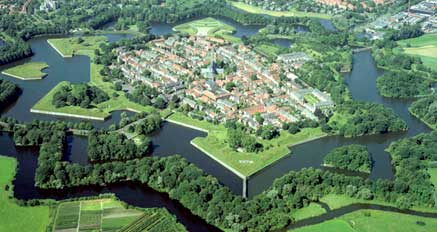 I then spend some time exploring the area with Paula as my guide, visiting the amazing geometric village of Naarden (coming from Yorkshire, I found this and several Dutch words to be in fluent Yorkshire!) We had lunch in a windmill, walked round a nature reserve simply teeming with dragonflies and had an excellent pancake inside an ancient Dutch barn.

We also went to the centre of Amsterdam, where I was bemused by the volume of bicycles, which were to be seen everywhere. Apparently 50,000 bikes are stolen in Amsterdam every year. They came in all shapes and sizes, some having buckets in front full of children!

Despite having a lane of their own, cyclists rode on the pedestrian path as well and rarely used hand-signals. Scooters and even motor-bikes used the cycle lanes, so there was danger a-plenty, especially for Brits who expect cars to drive on the left hand side. I twice was within an ace of walking in front of a car, having looked right and seen nothing – thanks for saving my life Paula!

We visited Anne Frank’s house, an great flea-market (presents were bought) I made the obligatory visit to the red light area, where there were dozens of hugely UN-erotic “window display girls” situated all around a large church. I walked past (but not into) several weed emporiums, quaintly known here as “coffee bars” and the air around them was positively intoxicating. A fabulous city with so much too offer. I also saw a mouse – where? there on the floor, quite dead. Sadly, it had no clogs on.

The job itself was to sit at a table folding models for the delegates as they checked the food out. The tree we had created top hang pledges upon (written on my folded logos) remained bare until we moved it to nearer the refreshment table, after which it positively bloomed. I made a variety of models to hand out and we felt the event had been very successful. Many thanks to Nat Rosen of Impact Unlimited who organised everything with consummate professionalism and made the whole experience an enjoyable one.

Paula having other demands on her time, I also strayed in a hotel, that I had pre-booked online. When we looked at google to check the route, it turned out I had seen a “Hotel Amadeus” in the centre of town, but had actually booked into an identically named hotel in a place called Haarlem, some 20Km out of Amsterdam!

When I finally arrived there in darkness, the owner said he had nearly released my room since the credit card info I gave them had a mistake. Thankfully he had kept it for me, or I would have been in a nightmare situation. A beer and courgette pasta overlooking the river soon calmed my nerves.

Haarlem was a beautiful place, with lots of old architecture, a huge church and an amazingly fresh market on Saturday morning. Inevitably, after several days of striding about the country, I could only walk about for about 3 hours before my legs gave me foot-gyp, so I went back to the airport early and spent a happy few hours watching planes taking off and landing. A short flight time saw the beautiful Yorkshire countryside lit superbly. A tiring but hugely enjoyable experience! Many thanks to Paula and Gerard for their welcome.