I was contacted through my site to supply some designs for a series of “Art Attack” interactive CDroms that were to be given free with various Kelloggs cereal boxes. The CDs were; Games and stuff (flying planes, windmills, fortune tellers), My stuff (design your own photo frames, CD cases, calendars), Party stuff (invitations, hats, masks) and Building stuff (puppets, models, theatres, master Origami). They had selected a series of traditional designs and wanted to use my bat, rabbit, pteranodon, leaf and various planes. These were turned into flash-based animations with the facility to draw your own patterns on a virtual sheet of paper, which you could then print out with crease lines present. 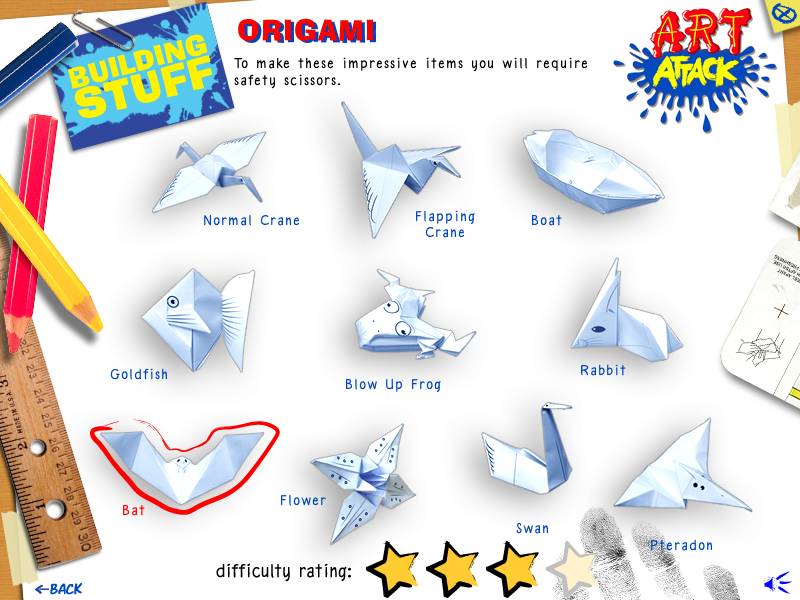 Sadly, that was the extent of my inpu

t and I didn’t get to see the results until they were complete. The animations are simple line drawings with the usual back/forward buttons and the folding lines are shows as moving patterns along the line. I have to say they didn’t look easy or clear to me, but I may be proved wrong. I found my way around the interface after a while and there is certainly lots to try out! The origami section (on the “building stuff” CD) included 10 designs. The “games” CD includes fortune tellers, bangers, frog tiddliwinks (froggliwinks surely?) and six flying designs.

The interface itself is bright and attractive and there’s certainly plenty to do, but from an origami perspective, it would have been so good to have a chance to comment at the design stage. There seems to be no links or reference to the BOS, even though I asked, although they’ve credited me (not altogether accurately) in the final shut-down sequence. Let’s hope lots of youngsters manage to fold something and get hooked.