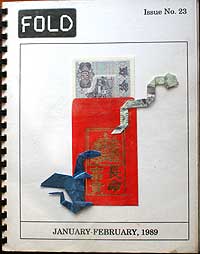 Many years ago, I was part of an APA (Amateur Press Alliance) known as FOLD. The idea was we each sent 20 hard copies of our bi-monthly article to a co-ordinator, who then collated them and mailed them back to us. There were no limitations on what we could include, folds, photos, cuttings etc, so we had a regular bulging collection of origami news, diagrams and information, with personal comments to each other covering life (my daughter was born and chroncled within!), death (one of our key contributors talked through his terminal illness, origami and anything else we were enthused about. Everyone’s opinion was respected and we were a true community.

Imagine an extended personal letter between 20 origami enthusiasts and remember, this was before the Internet and email. I don’t think anyone would have the patience these days with the net at our fingertips and software like this blog. And what enthusiasts! Mark Kennedy, Robert Lang, Michael LaFosse, James Sakoda, Florence Temko, Rachel Katz, Joanne Ortman and many others came and went in an ever-changing membership roster. Eventually, it came to an end, but the baton was picked up by people who wanted to join us but found there was no room and so started their own version, called IMAGIRO. I joined that as well!

A rare chance brought Florence Temko, David Lister and myself together at a BOS convention (I can’t remember where or when!) so we posed for this photo, which came out very nicely. I think this was the first and last time I met Florence in person, but David, of course, has been to many conventions since then! How young we all looked (well, I did, modestly displaying my latest mask 😉