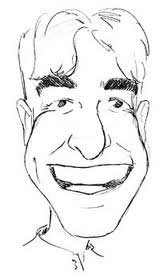 This has been a very difficult piece to write. Having known Rick for nearly 25 years, our relationship swung from highs to miserable lows and latterly to a more even keel. I wanted to be honest about things and not just apply an airbrush to his life. I hope people will forgive me if this makes for painful reading, since mental illness is still a taboo subject for many, yet so many people suffer from it to some extent.

I first met Rick in the late 1980’s at a BOS convention. he spoke admiringly about a model I had exhibited and we very quickly hit it off. He had a great sense of humour, loved origami and was wonderful company. I met his wife Julie (a truly lovely person) and we started to exchange letters on a regular basis – this was before the age of the internet, for younger readers! I still have many of these letters, they were ebullient, happy, carefree and full of mischievous humour. We supported opposing football teams and so no opportunity was wasted to have a dig at each other about this. When working in the Derby area, I met and stayed with the Beeches and Rick came up to Sheffield when he could.

After a few years in the BOS, Rick decided to follow my own path and began work as a professional paper-folder. Whilst not a creative folder, his natural charisma and acting experience made him perfect for entertaining and the dreaded art of “table-hopping” (which involved going round a room of diners, folding little presents for them and generally schmoozing). Being less outgoing, I was delighted to pass on requests for this type of work to him and concentrate myself on the more creative aspects such as commissions, authoring etc.

However, it wasn’t long before Rick began to branch out into every aspect of origami work and it soon became clear that he and I (along with Paul Jackson in London) were in effect competing for the same work. Paul and I were sanguine about this – there was enough work to go round and we bid for work on our own merits. Rick didn’t always feel this way and began to see us as encroaching on work that he felt should be his. His communications with me slowed and became more and more heated whenever I did work that he felt was rightfully his. By this time he had two young daughters and no doubt felt under huge pressure to support them financially, not an easy thing to do, as I can attest.

Sharing a train journey with him to a BOS council meeting, I became aware that Rick had mental health problems and he admitted taking his medication irregularly, resulting in quite extreme mood swings. This also resulted in a degree of paranoia and he later accused me of ringing his clients and trying to sabotage his relations with them. He also had a carefree approach to origami copyright that set him at odds with many other professionals. He saw everything as “fair game” and simply couldn’t understand the fuss that he left in his wake. Origami was his love and he wanted to share any and all of it in whatever way he saw fit.

His not infrequent intemperate exchanges with clients eventually saw him excluded from the BOS, after considerable opportunities to amend his ways. Whilst he never really understood the reasons for this, it must have hit him hard. He began to develop an alternate career in hypnotherapy and even sold a large part of his precious book collection to fund this. Over the last few years, I tried hard to repair our relationship and we once again exchanged cordial emails. His medication seemed to be keeping things stable and all his close friends hoped the promise of a new life in Canada with his fiancée Giselle would be the chance to put the past behind him.

Alas, it was not to be and I can only imagine that the death of his ex-wife took him to a place from which he could see no light and he took his own life. His two daughters thus lost both parents within a week and my heart goes out to both of them. His struggles against mental illness were (sadly) not unique, nor did they justify his acerbic attacks on anyone who didn’t share his views. However, they were responsible for much of the pain in his life and probably for the ending of it.

All this is deeply sad, but it’s not the whole story of his life. At his funeral, his elder sister told me that he was devoted to origami from his early years. His folding travels took him around the world and many people who met Rick in passing were struck by what a good-natured, generous and charming man he could be. His teaching of origami was consummate and almost legendary, allowing him to successfully teach even very complex designs to his classes. His tastes in origami were also of the highest order – if he recommended a design, you could be sure it was worth folding.

This is the Rick I try to remember.